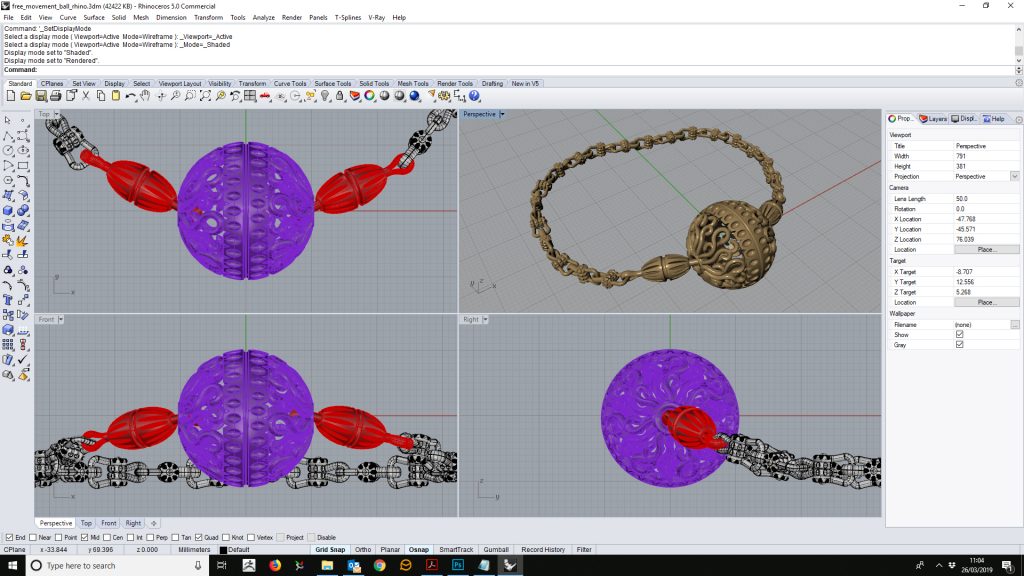 Originally developed as a response to AutoCAD’s limitations with smooth 3D modelling, Rhino 3D is a general product design NURBS-based CAD tool which has been adopted by many different design specialities such as furniture, footwear, and jewellery.

While the core Rhino program is all that is really needed to design models for rapid prototyping, each design speciality has added extensions (or plug-ins) for Rhino to make their jobs easier. Some examples include rendering tools (such as V-Ray or Keyshot), additional methods of working (T-Splines), or some of the older Jewellery plug-ins (such as RhinoGold or RhinoJewel). Generally when I provide Rhino 3D training for jewellers, I teach the software as if students only own Rhino without any plug-ins.

Rhino is one of the few truly general product design CAD programs to really make the concept of a general program for everyone work. It’s general set of tools give it a great deal of flexibility, and also make it ideal for designing precision assemblies. Also, it features a tremendous amount of customisability to suit different methods of working.

Its strength is also its weakness, however. On account of being a general purpose product design CAD program, there are no time-saving tools or techniques for specific industries included, so certain tasks are always slower than they would be in a jewellery specific program.

There’s more to it than just that. Contact me to discuss the advantages of Rhino 3D relative to other jewellery CAD programs, and whether Rhino is the best jewellery CAD software package for you.

If any of these tutorials whets your appetite for learning more about how to use Rhino for jewellery CAD design and manufacturing, I can provide you with three options:

There have been several people who have made jewellery CAD tutorials for Rhino over the years, with quality varying all over the shop. The following are a list of the best I have found. In particular, Khay Amani has done a series of very helpful basic Rhino tutorials which are included below:

There is also a good Vimeo Rhino Tutorials page.