For my second article in the “Dark Side of New Technology” series, I want to discuss the unintended side-effects of 3D model marketplaces and online retail and service platforms, as well as what can be done to fix these problems.

The Rise of Platform Selling

The first e-lancing sites were built based on a very elegant purpose—find a way to connect those hidden service providers and suppliers with customers via a uniform virtual storefront. Its earliest incarnations were sites like Guru.com, designed to sell the services of specialists.

When Etsy appeared, that was the game changer. They had taken Ebay’s online sales model and focused it on the creative craft market, making the world’s largest craft market on a website. And it was a revelation.

Shapeways then gave their own twist by giving 3D content creators a route to sell their models directly to the client, while they served as a kind of fulfilment house.

While the concept of connecting with customers via E-lancing and crowdsourcing was already a decade old in some industries, this new business model made a small but important innovation—the host site served as the entire interface between supplier and client, handling most of the aspects of business and promotion, while the client got paid for their work. These hosts were not just temp agencies like the old e-lancing sites, but more like gallery curators. Eventually, this business model came to be known as Platform Selling.

Copycats abounded. Fashion jewellery loved this particular setup (and gave us Wolf and Badger, Stilnest, and many others). Shapeways was joined by Thingiverse and i.materialise. We even started seeing bespoke design service platforms like Make it Mine Online and CADfolio for connecting multiple designers with possible clients. And now Amazon Handmade has appeared as a price-cutting competitor to Etsy.

On the face of it, it’s all a wonderful idea. Set up a business which serves as an efficient middleman who can connect service providers and the general public like never before. Suddenly people who never would have had a chance to get customers for their service can do so. Or people who have excess commodities have a way to make money off of those idle properties.

What’s not to love, right?

If Everything Is Uniform, No One Stands Out

Over time it has become clear there are two very destructive side-effects to this system. While Amazon and Ebay shared some aspects of these problems, it seems the way these problems manifested on these new retail platforms was unique.

The first problem is that when you don’t own your own sales façade and control your own customer experience, you lose all your bargaining power. As more and more people have signed up to be service providers for boutique retail or 3D printing sales platforms, customers have started to get the impression that craftsmen were a dime a dozen. If every designer was showcasing their wares in the same standard format, this standard front for everyone stripped away all differentiating factors except two—product imagery and price. If you could make your product look visibly original in these constrained marketplaces, then you’d have a chance. But God help you if you sold something that someone else could make more cheaply (or was willing to sell at a loss).

Handing all the control over to the consumer has resulted in an irresistible downward pressure on price. It’s no accident that notonthehighstreet.com has a price search which only goes up to £250. The problem is the only way a jeweller can make any living on a piece of jewellery worth £250 is if they’re selling hundreds of that particular item. Even then, you’d need a factory paying workers much lower wages than any developed country could sustain.

If you’re bidding on a job through a crowdsourcing or e-lancing site, this problem is compounded. There is nothing stopping a customer from asking for jewellers to make a £1000 piece of bespoke jewellery for £200. While it might seem that common sense that nobody would respond to a price that cheap, usually someone will. The entire platform selling experience seems to hinge on the fact that there will be someone out there who is willing (or desperate) enough to work at a loss to gain the customer. The customer benefits, and perhaps the seller benefits immediately, but every other seller loses out in the longer term.

This brings me to the second side-effect:

The Trouble with Gallery Owners 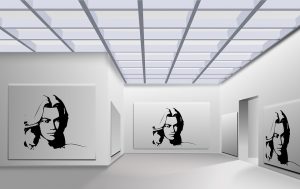 There is a reason why gallery owners and curators have a bad reputation among artists and craftsman for centuries. I suspect it’s a failure of human nature—if one person knows more about business than everyone else at the table, and they are the one who collects all the money from customers and writes all the contracts, who keeps them honest? The story of music industry executives screwing over musicians with cleverly constructed contracts is so common it’s become a stereotype. Fine artists in the early 20th century used to get 50% of the value of their original work sold in an art gallery. Now they’re happy if they get 25%.

Craftsmen need people who are stronger than them at business to help them reach their customers and make money. But even before the internet existed, coming to an arrangement which was fair to both parties was hard. The act of creating original work is more than just time consuming. It is tremendously draining on a creative’s energy and self-esteem. Even if a creative learns how business works (which few actually do while in art school), they often don’t have the willpower left to ask for a fair price for their work.

Now, just as with everything else on the internet, the sheer numbers of creatives looking for a limited number of stockists tips the balance in favour of the hosts. The more creatives that apply to a particular shopping portal, the weaker each of their individual negotiating powers become. Why should the website owner give too much away if dozens of small businesses contact them begging to be stocked every week?

In the case of 3D model marketplaces, this unbalance of power is even more pronounced. Although the designers don’t need to lay out money to generate stock, there is also less that the sales platform is actually asking of you. In effect, they just need to sell one copy of your computer file. How much time you spent making that file becomes all but irrelevant. Even the perceived value of the design only adds a modest premium on top of all the money the platform is spending on 3D printing and processing the file. In this environment, either you manage to develop a design which sells like crazy (and for which you get paid a modest royalty fee), or you’re working for almost no wage at all.

Sharecropping in the Digital Age, and What We Can Do About It

A helpful way of visualising many of the problems with platform selling is to compare it to sharecropping. Individual workers (the “sharecroppers”) work on the land owned by a much larger wealthy landowner. The landowner sells the work the sharecroppers do on their farm, taking a percentage royalty of each deal.

The problem with this system is that the sharecroppers have absolutely no negotiating power against their landowner. Ultimately the only thing keeping the landowner from exploiting their sharecroppers is the mobility of the sharecroppers themselves. The fewer opportunities there are for these workers in the economy elsewhere, the more they are trapped in this fragile artificial work arrangement. As economies in the developed world slow, this could easily prove to be a serious problem if left unchecked.

One solution to the problem would be to encourage these businesses to be more thoughtful in their governance and handling of the contractors who join them. The problem is this would likely be a defiance of human nature, as there is no incentive for these owners to do anything but focus on their profits.

Weirdly enough, we do have one ready-made solution built into this system: the more people walk away or steer clear of these platforms, the better their offers will become for the few designers left who do stay.

Perhaps the ironic solution to the problem is that we need more of these platforms, not fewer. Having a greater diversity of marketplaces means that there will be a better ratio of stockists to craftsmen. And increased competition is one simple way of keeping stockist agreements reasonable. Even then, this may not be enough— smart businesspeople aren’t going to sign up to a deal which isn’t favourable to them.

Ultimately, I reckon there’s no escape from the need for better legal protections for freelance workers. But that is an issue which can only be handled by big government, even if it is one which they will be forced to face sooner or later (especially as unemployment and underemployment continues to creep up in the developed world).

In the meantime? Invest time and money into building your own retail space (digital or otherwise), consider the possibility of forming a cooperative, read the terms and conditions for every platform and stockist you approach, and don’t be afraid to walk away if something doesn’t feel right.