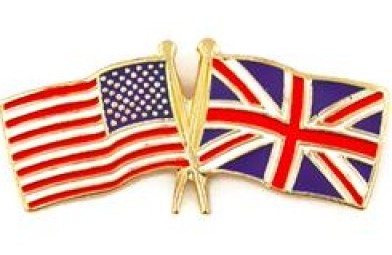 In the field of jewellery design and manufacturing, there are a few American transplants over here to Europe (Elizabeth Gage and Jack Rosenthal of JAR). While I wouldn’t be so audacious as to compare myself to their talents, I too am an American transplant to the Europe, the UK in particular. Given my experience with both the American and British jewellery markets, I reckon this gives me some perspective to allow me to talk about some key differences in the American and British jewellery industries.

Since this blog focuses on jewellery manufacturing technology (in particular, technologies related to CAD/CAM), and I would hardly claim any economic expertise, I’ll direct my focus primarily onto the business of jewellery design and manufacturing. It’s all too easy to say that there are differences in the tastes of the consumers in each country, but the really interesting question here is how are businesses affected by consumer tastes and the economic climates in which they operate?

The first difference between the US and UK jewellers to note is that, while the UK’s fragmented jewellery industry can still be called an industry, American jewellers are even more scattered and fragmented, to the point where using the word industry becomes a bit of a misnomer. That’s not to say there aren’t many good American jewellery businesses holding their own rather well over here, but their connection to their colleagues is relatively limited. Most work on their own, with connections to competitors and outsourcers kept to only what is necessary.

This has an interesting side-effect which seems to be a cornerstone of American jewellery businesses—self sufficiency. While it is definitely possible to find self-contained town jewellers scattered throughout the smaller cities in Britain, the overwhelming majority of jewellery businesses in the US tend to behave in the manner of these self-contained town jewellers, even if they’re located in big cities. Many jewellers fabricate their own wares, cast their own wares in house, and with the absence of a central assaying body in the US for precious metal, they even test and assay stamp their own goods.This self sufficiency offers an interesting trade-off for their business. On one hand, it means they’re highly adaptable and relatively resilient to recessions. On the other hand, however, it does mean they’re anchored to one location, and expanding their business model to a second shop or into a chain can become a problem. As it happens, the demand for luxury goods in most American cities never gets that high anyway, so this is rarely an issue.

The closest we find to the London way of doing jewellery business (ie a series of specialists) seems to occur in the largest cities. Like certain old European cities, places like New York and Los Angeles still boast the remnants of a jewellery quarter. These operate in much the same way to the traditional specialists you’d see elsewhere. These seem to be the main locations where the diamond traders can be found (again, not unlike the UK market).

These jewellery quarters are where we also tend to find a few unifying organisations which collect and disseminate information to the American jewellery market. Many of these are quite good, in some ways far better handled and more proactive than their European counterparts:  instoremag.com, MJSA, ganoksin.com, and the Society of American Silversmiths.

It should be pointd out that the GIA and their isolated headquarters in Carlsbad is definitely an exception to the rule, with its far-off location justified by necessary security and the myriad worldwide branches set up to handle local business.

This self-sufficiency and isolation also has had an interesting effect on the application of technology to the business. By virtue of their isolation, a higher percentage of US jewellery manufacturers are customer-facing (or have customer facing elements). Or to put it another way, nearly every American retail jewellery business is also a manufacturer. This has had a direct impact on their choices of CAD software, as well as its application.

How CAD Fits In

One of the problems with working with product design CAD software is that many types of complex objects are too difficult to make in front of a customer. At best, fully functional product design CAD software would mainly be used in a retail environment to show off models, and even then there are many tools out there which are better designed for the purpose of showing models to customers. Indeed, a whole subcategory of so-called semi-bespoke CAD has appeared to allow designers to work on pieces quickly and easily in front of the customer (this would include software such as Countersketch or Firestorm CAD).

Due to the isolated nature of the majority of American businesses, the idea of having to depend on an external source for 3D printing models tends to sit badly with the all-in-house mindset. This means that more often than not (but not always), most town jewellers who invest in CAD will also invest in the most affordable RP machine they can find. This goes a long way towards explaining the greater popularity of CNC mills in America versus 3D printers. But without a doubt, as 3D printers come down in price this will change.In the case where an isolated town jeweller has to depend on outsourcing to get a process done, the need for this outsourcing to be as trouble free as possible is even greater than in the UK, as the shipping is often further and more expensive. So all-in-one outsourcing services such as Stuller’s 3D Printing and manufacturing bureau have thrived, especially when linked to the semi-bespoke CAD software Countersketch.

One big side effect of being a town jeweller is that it is vital that they are able to serve all the needs of their local clients. That means having to provide basic wedding bands alongside (or perhaps far more often than) anything creative. Almost as a general rule, you can tell the cultural focus and cosmopolitan nature of a town by the number and size of jewellers who have freedom to design creative jewellery. On the flip side though, as wedding jewellery is considered on a level with other basic needs for a town or village, the job security of the town jeweller is significantly higher than it would be in big city shops, and their social status among the community is also higher.

Lessons To Be Learned From the Americans

What does this mean for British jewellers? Well, there is a lesson here that containing in-house as much of the manufacturing cycle as possible can help to insulate you somewhat from a recession. The trade off for this, however, is liability. One of the biggest reasons why more British microbusinesses don’t use this business model is because they simply can’t afford for things to go wrong. American companies insulate themselves from this for the most part by selling retail, but even that carries risks. The American model of self sufficiency makes for an appealing idea for expanding and protecting your business, but what works over there may not work here.