(This marks the first of a series of Frequently Asked Questions posts. See the rest of the FAQ pages.)

Which Jewellery CAD Software is the Best?

Over the years, the students in my jewellery CAD courses as well as my private clients have asked me a lot of questions about CAD as it relates to jewellery manufacturing. Many of these questions were often the same. As I thought it better to tailor my answer to each student’s needs, I resisted writing a single standard answer for quite a long time. Then it occurred to me that I could probably answer at least some of the questions all at once, and just fill in the gaps if people wanted to know more.

This is how my series of Frequently Asked Questions began.

On this and subsequent articles in my FAQ series, I will break down the most commonly asked questions from my own particular fields of expertise. If anyone has any more specific questions or is not clear about something mentioned here, just leave a comment below and I’ll add an answer to the entry.

I Want To Learn Jewellery CAD. Where Do I Start?

The first thing you should do is figure out how you want to use design software. There are actually several different kinds of computer-aided design software available, each one designed for a different purpose:

In addition, several of these software packages have plug-ins of their own which help jewellers model and visualise their jewellery:

Why So Many Different Kinds?

You could be cynical and say that it’s different companies competing for a piece of the same market, but in truth the tools are all rather different. Even for tools which serve the same purpose (such as 3Design, Matrix, and Firestorm), they behave in different ways and were built starting from different design philosophies. It’s not uncommon for certain specialists or design houses to use more than one software package in conjunction. Adobe Illustrator and Rhino, for example.

Okay, So There Are Different Kinds of Jewellery CAD. What is 2D Design Software?

2D Design software is a bit like working with a set of paintbrushes and a palette of colours. It’s designed purely for working with bitmap images (such as photographs or illustrations) composed of pixels. Tools like these have been around since the early 80’s, so they’ve had plenty of time to come up with clever ways to paint, manipulate, and apply special effects to images. Pretty much everything you could think of doing with a paintbrush or a photography studio can be done with 2D Design software.

The most obvious 2D design software tool available would be Adobe Photoshop, but it is not the only one. There is also Corel Paint and Sketchbook Pro, among others. There is even a jewellery specific 2D Design software package– Gemvision Design Studio (previously known as Digital Goldsmith). While perhaps not as flashy as 3D design software, these 2D tools are vital in their own right for illustrators and draftsmen, allowing them to make paint-ups and renderings of designs in methods as close to the traditional methods as possible. They also serve a vital role in post-production of photography and CAD renders, preparing and sizing the images for use in print or on websites.

As it happens, I usually recommend that absolute newcomers to any sort of computer based design start with a 2D design software like Photoshop or Corel. Compared to other types of software, their learning curve can be much easier, and can help provide a gateway into more complex ways of working.

Think of 2D CAD software as a technical draftsman’s table, compared to 2D Design software’s paintbrushes and palette. Both can draw a picture, but the purpose of each picture is very different.

The purpose of 2D CAD is precision, usually for the purposes of design communication. Rather than working with bitmaps and pixels, 2D CAD uses vector lines. Whereas pixels are colours at locations on an image, vectors use points on a page with lines connecting them. There are three big advantages to using vectors for technical drawings:

What is 3D CAD Software? 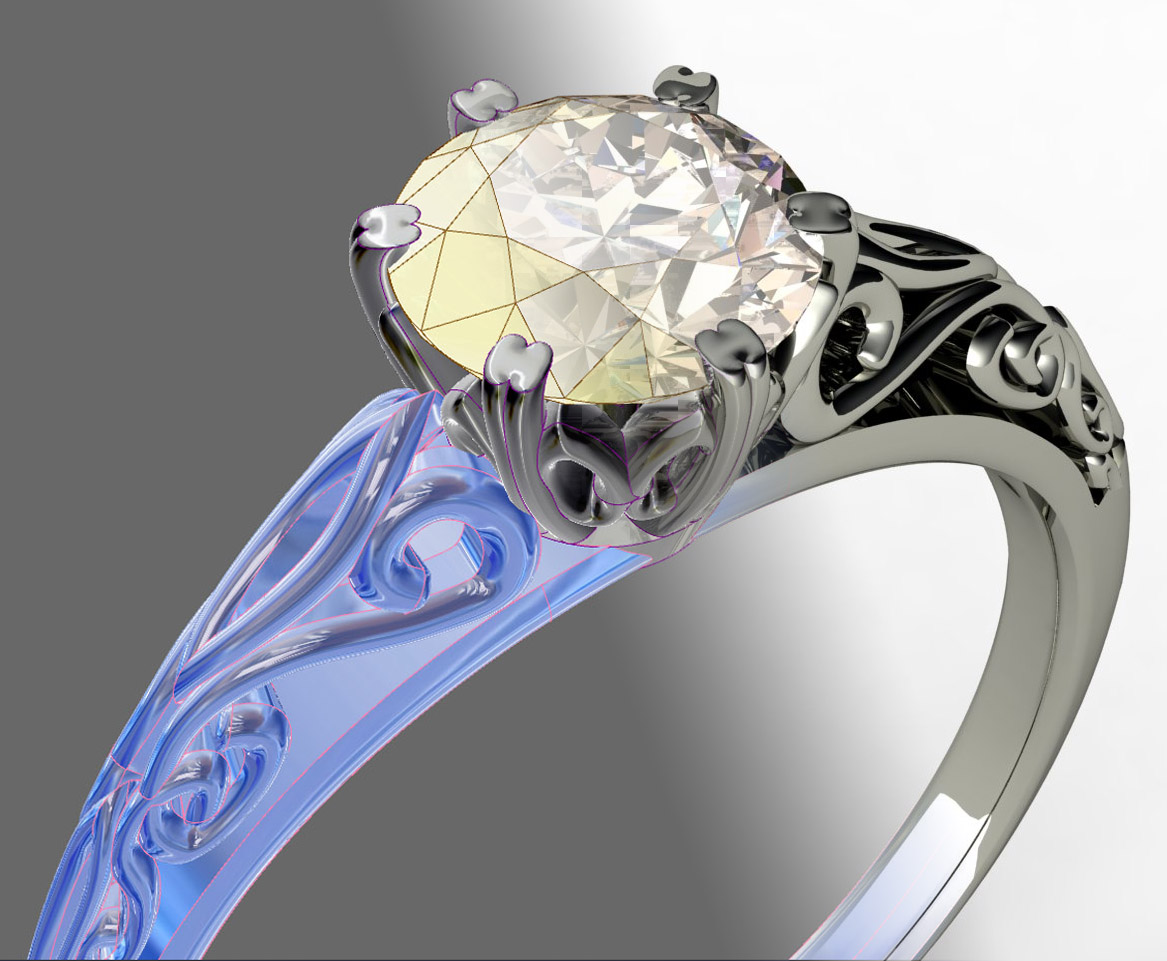 3D CAD is what most people think of when they are talking about CAD. Conceptually, it’s the digital equivalent of fabrication tools and a wax carving kit. Rather than just simply making designs on a screen, the user is actually building his design to exact tolerances and specifications. The end result of CAD can be either rendering (producing a photorealistic image) or rapid prototyping (producing a physical model for use in manufacturing).

CAD models are often (and incorrectly) referred to as “drawings”. Since they are still technically 3D even if they’re only stored on a computer, it’s better to call them “3D models”. Using 3D CAD for product design is not a new thing. The first military applications of CAD/CAM appeared in the 1960’s, and the first commercial product design with CAD started happening in the late 1980’s. But it wouldn’t be an exaggeration to say that there is no field of product design which doesn’t use some form of CAD for manufacturing. 3D CAD’s advantages include:

What Are Some of the Advantages of Each Kind of 3D CAD?

While each of the different 2D and 3D jewellery CAD software packages were built based upon a different design philosophy,  they are all capable of creating the same sorts of basic jewellery forms (eternity rings, solitaire wedding rings, etc.). You can only see real differences and advantages to individual programs when you get to more advanced types of design work.

For this reason, I’ve set up two features in this site:

A Couple of Comments (and Disclaimers) Before We Begin

In alphabetical order in each category and level. I’ve recently removed discontinued software, and added a note below:

Making a Size Range From a Single Ring

Relief Carving and Sculpting (such as coins, medallions, or family crests):

Applying Texture or Inlay With Shapes Onto a 3D Surface

I’ve run a series of Rhino rendering plug-in tests to compare the quality of each of those rendering tools. As it stands now, there is pretty tight competition on quality between these top contenders.

Working in Front of a Client

Size of User Base

While nearly all of the above CAD software solutions offer great user support, where that support comes from also depends on the size of the user base. Generally the wider the user base, the more places you can go to get your questions answered. However, with small user bases, you’re able to get quick answers directly from the developer, and it also means they’re more likely to listen to your feedback on how to make the software better. So it’s a trade-off.

What Happened to Matrix, RhinoGold and Other Discontinued Software?

Over the years, several interesting programs have come and gone from this list. Since people still come to this blog looking for information about them, I’m happy to provide info on them (just contact me and ask). I even still teach these programs whenever I’m asked. However, this article was always written for people looking for new software to purchase, so it’s more helpful I point you in the direction of their replacements:

Why Are Certain Programs Missing?

You will notice my jewellery CAD software comparsion list doesn’t include all types of CAD software used for 3D printing. I’ve tried to keep the focus on CAD software used explicitly by jewellers for making jewellery. I do regularly review the contents of the list, so if you think I’m missing something, contact me and I’ll look at adding it in.

Do You Have Any Examples of What These Jewellery CAD Programs are Like to Use?

You have two options if you want to see what most of these software packages are like. The first would be to look at some of the tutorial videos for each jewellery CAD program. The second would be to ask for a demonstration from any of the sales representatives of each software packages (contact links below). With a few exceptions, nearly every one of these software providers has sales representatives keen to show off the features of the software to you.

Where Can I Purchase Them, and How Much Do They Cost?

With the exceptions of Adobe and Rhino, I’m afraid you will have to go directly to the software developers to purchase any of these pieces of software. Fortunately, nearly all of them have sales reps, so they’ll be more than happy to help you out. With regards to costs, they range anywhere from £1200 (for Rhino 3D standalone with no plug-ins) to £7000 (For MatrixGold Essentials), including tax. The problem is these costs change somewhat from country to country, and also depending on promotions and other factors. It’s always best to ask them directly. To this end, I’ve provided links to every single jewellery CAD manufacturer’s website below:

If affording software is an issue, I wrote an article about managing the cost of software for the FAQ series.

Did I Miss Something?

If you have any thoughts or questions on the jewellery CAD software comparison list, don’t hesitate to comment below, or contact me. This list was and continues to be updated as new information comes in and the landscape changes.

20 January, 2021
2 Comments
Introducing my Rhino 3D CAD Rendering Comparison Test! Come and see my first round of comparative test results, as well as the rules for the remaining tests.
READ MORE