<Update- The publishers got in contact with me after writing this review, and helped me with some corrections to some of the publishing information and dates. The article has been amended accordingly.> 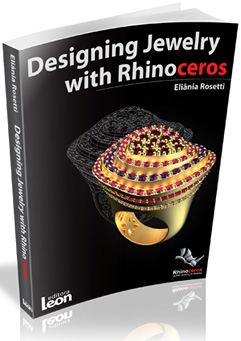 A few weeks ago, I discovered a book called Designing Jewelry with Rhino by Eliania Rosetti being out of Brazil. Since it’s become clear that more CAD jewellers need to know about this book, I’ve written a brief review here.

Another Good Jewellery CAD Book for Rhino 3D At Last

Speaking from experience myself, I know how hard it can be to develop a technical manual for a piece of design software. Writing one is a bit like trying to build a house out of shifting sand. It takes years and multiple repetitions of testing to even develop good tutorials for training, much less effective images to communicate your tutorials clearly to users of your manual. Most people never make it past the stage of creating good teaching notes before the next version of the software comes out.

Incidentally, Rhino is one of the few CAD programs to have stayed in the same version long enough for teachers to have had enough time to build sufficiently strong tutorials to share with the world. We’ve already seen a good Rhino CAD Jewelry book several years ago from Dana Buscaglia, the former head CAD tutor of Fashion Institute of Technology in New York. While Buscaglia’s book came out in 2009, in 2011 another experienced Rhino tutor in Brazil named Eliania Rosetti quietly refined her own way of teaching orthodox jewellery CAD techniques and released her own book, and released her own book.

Contents of the Book

Rosetti’s book has a lot in common with Dana Buscaglia’s older book in terms of basic concepts, mostly because most tutors tend to start with the same fundamentals when working with the same software. But in Rosetti’s new book, there are two big improvements on anything anyone has offered before on the subject of Rhino CAD for jewellery.

The first one is tolerances. For years there has been an understanding among the best CAD tutors that CAD can only take you so far without some grasp of the tolerances of manufacturing. Most of the time this was taught separately from the actual elements of CAD. Rosetti’s book is the first manual besides my own course notes I have encountered which explicitly addresses this as she is teaching how to make standard jewellery forms like stone settings and rings. And while her formulas for tolerances do differ from what I’ve seen taught normally for these subjects, her maths and measurements are sound.

The other difference is the advanced level to which she ultimately takes her tutorials. Unlike anything produced before for jewellery making in Rhino, she spends quite a lot more time on more advanced configurations of rings, such as surface inlay, lines of bead set stones, and good pave practice for domes.

She also includes with it a separate e-book specifically focused on using the Brazil for Rhino rendering plug-in to get the most out of jewellery rendering. I’m not a fan of that particular renderer, but she has certainly achieved some very good results with it and offers good advice for those who choose to use it. Many of the samples provided in the book seem a bit dark, but that’s probably just a choice of material.

The advanced tutorials are a welcome addition for experienced users. Combined with the early pages introducing basics at a reasonable pace, Rosetti has made a very helpful and comprehensive book for providing jewellery CAD students a way of working and improving on their own, and I would happily recommend it to anyone looking for a good Rhino CAD training manual.

The problem with this book at the moment is that it’s not available through larger publishers or websites, and the current publisher Editora Leon is currently selling the remainder of their stock. When the last of the series sells, it will be out of print.

The remainder of this edition of the book is available now through Editora Leon.