Comparing 3Shaper and T-Splines for Matrix 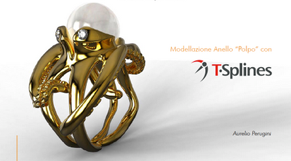 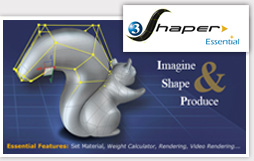 Recently, we’ve started adding both T-Splines and 3Shaper to our computer courses here at CAD Jewellery Skills. This means I’ve been spending a lot of time with both. While doing this, it occurred to me that not many other people would have the experience of working with both tools, while simultaneously not having any vested interest in selling either.

So, from this stance of neutrality, I would like to offer my evaluations of each subdivision modelling plug-in for their respective jewellery CAD software packages.

3Shaper (for 3Design or standalone)

3Shaper is Type3’s (the makers of 3Design) answer to T-Splines subdivision modelling. As typical with the company, they choose to make everything in house themselves rather than buy in outside software to add onto their main program 3Design. The advantage to this inevitably makes for better integration into the software, but perhaps at the cost of speed of development.

Interestingly, 3Shaper is also available as a separate standalone package, which is unusual for this sort of application.

3Shaper’s interface benefits from years of trial and error and feedback of working with 3D widgets in 3Design, augmented by lessons learned from using T-Splines itself. The end result is a very elegant interface indeed for working with subdivision modelling.

The one weakness of T-Splines (taking objects into and out of the main program) can be seen in 3Shaper, but not in the same way. It’s nearly always better to start in 3Shaper and go to 3Design once you’ve finished your work with splines. However, this single weakness is offset by the ability to go back in and edit the Shaper surface even after you’ve booleaned 3Design solids onto the surface and added pave.

T-Splines (for Rhino or Matrix)

T-Splines has gone from being an interesting experiment in introducing subdivision modelling into NURBS modelling software to becoming an industry standard for many fields of production design. At the risk of angering many of its staggeringly large user base, I do have to say this tool started out with a rather awkward user base. Even though the functionality of the tool is only just becoming refined, it has become the most popular plug-in for Rhino, even more popular than rendering tools! It’s no surprise then that they were acquired by Autodesk earlier this year. It’s also no surprise that Gemvision have been working hard to promote T-Splines’ since it was included in the release of Matrix version 7.

The makers of T-Splines have had a few versions of their plug-in to get the bugs corrected and the interface with Rhino working properly. As it stands now, this is the easiest this particular tool has ever been to work with, to the point where the interface even makes use of existing Rhino commands within it.

Perhaps the only possible point of weakness would be in the taking objects into and out of T-Splines from NURBS. The objects are effectively entirely different types of geometry, and while the conversion is fast and simple when it does work, it tends to work a lot better going from T-splines back to NURBS.

After spending some time with both of these tools, I can see why so many designers are now flocking to subdivision modelling tools. T-Splines is a very welcome addition to Rhino and Matrix to add on more graceful modelling of flowing organic shapes. It doesn’t quite reach the level of sculpture we’d see in programs like Claytools or Zbrush, but for most types of flowing work, it will do beautifully.

3Shaper does all this and more, by making a tool which completely integrates into 3Design’s advanced parametric modelling system. This means you can go back in any time to rework the subdivision sculpture you’ve made, regardless of how many Booleans or other objects have been stuck to it.

As you can see from the videos above, both tools are very similar to each other and to other subdivision modelling tools inside programs like Maya. Each of these tools is also perfectly suited to the platform for which it was built. While I must give T-Splines its proper credit for starting all of this, and for being the lower cost package, I have to give 3Shaper the slight edge for its more elegant interface.