Sharing Between CAD Programs – The Trouble With Importing and Exporting Models

I wanted to take a moment to talk about sharing.

…No, I don’t mean “free love”. I’m talking about the ability of different software packages to pass models and files between each other, more commonly referred to importing and exporting files. The problem is, as all of you who have worked with multiple different CAD software packages before, it is not always that easy.

It really boils down to a question of: why does there need to be so many different proprietary file formats among CAD software packages?

I can accept that each software developer wants to focus on unique features to differentiate their software from others, but at the same time it frequently seems as if these same software developers have failed to anticipate all of the cross-conversion that was going to be happening between major software file formats. Indeed, the more popular software becomes, the more demands will be placed on the ability of that software to convert to other file formats.

Of course it’s in a software developer’s interests to make their software as much of a be-all and end-all for users in a particular specialty. However, the reality makes that all but impossible, partly because different users are often called on to exchange files between different software packages (especially across country lines where different design softwares are favoured), but also the demands of CAD designers have already surpassed the point where what they need is more than any single software provider can provide. Indeed, the software developer’s ideal of a user choosing only one piece of technology for all their CAD modelling needs is seldom the reality.

With this in mind, I believe software developers should take the task of creating and preserving common standards for file formats a lot more seriously. It is in software developers (and software users’) best interests to make their files as transferrable as possible.

What’s In It For the Developers?

Annoyingly, it’s not just CAD software developers who have trouble with this concept. Microsoft has been a big offender with Microsoft Word for quite a long time. Indeed, several software industry experts tend to think most of the coding put into Microsoft Word’s .Doc and .Docx file formats is purely encryption to prevent it from being opened in other text editors or old competitors like WordPerfect.

That being said, there are historical examples of how making files more transferrable is good for business. For one strong example, I’ll go back a little bit into the history of Apple Macintosh and Microsoft Windows.

Once upon a time back in the 90’s, Mac and Windows were not only vastly different platforms, but they wouldn’t even read the same storage disks. When companies formatted a floppy disk (ancestor to the USB drive for those who don’t know), then you’d have to do it for either Mac or PC. You couldn’t move even a text file from one machine to the other, unless you e-mailed it. For the vast majority of companies and educational institutions which used both types of machines, this became an obstacle.

Apple eventually caved to pressure, and developed the PowerPC. This new machine, while still operating a Mac interface and operating system, could now read Windows formatted storage disks. The result? Not only were Macs and PC’s more easily able to talk to each other (thus greatly boosting productivity in workplaces), but Macs sales went up because they were more useful to networks which used PCs.

The moral? Quite simply, opening up compatibility improves market share. Conversely, the more a piece of software makes it difficult to transfer files into and out of itself, the more they isolate themselves, limiting their market share.

How is Jewellery CAD Affected By This?

What does this have to do with Jewellery CAD design software? I’ll bring forward five witnesses: 3Design, ArtCAM, Matrix, JewelCAD, and Rhino. (Nobody’s safe on this one.) 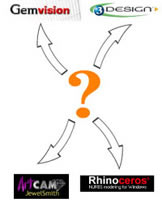 I use all of these software packages, and they are all excellent design tools. But there are occasions when I have to take something out of one of these programs into another. Like all CAD software these tools have some concessions to cross-compatibility, but they certainly don’t make it easy. All of them require substantial workarounds, and sometimes a significant amount of wasted time in conversion. Even seemingly standard file formats such as IGES or OBJ can frequently produce inconsistent models, bad geometry, or strange quirks in construction which require substantial editing to make usable.

I would humbly request that all CAD software design tools ensure their conversion or exporting options actually work before releasing the software. The more transferrable their designs are between different pieces of software, the more useful these tools will actually be to the users themselves.

Indeed, by making transferring models in and out of their software as easy as possible, software developers help ensure their software stays competitive and end up keeping the very thing they’re trying to protect with exclusivity – their user base. 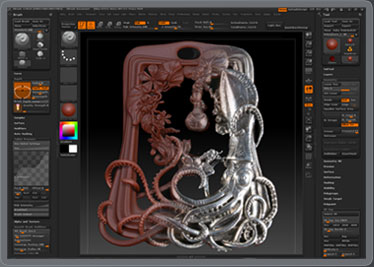 For a more directly relevant example of how this can apply to CAD, I present a case study of ZBrush.

ZBrush started out as a tool boldly designed to do things which CAD was traditionally terrible at producing. Specifically, generating displacement maps to help with creating physical texture on NURBS surfaces. In layman’s terms, putting the bumpy skin on a rhino. The problem with early versions, however, was that it was mainly designed to work with itself, to produce pretty pictures, or maps which could be incorporated into other pieces of software the hard way. This required some real technical skill on the part of the users as well as an understanding of advanced options with displacement maps in the various software packages.

But due to the sheer potential of the tools, users kept using and and demanding an easier way to interface with other software. ZBrush caved, and with version 3, they started allowing users to import and export models more easily from Zbrush into and away from other programs.

The result of this change in the interface was that users flocked to the tool by the thousands, market share shot up drastically, and Zbrush started on its current route to become nearly as vital a tool to the 3D character designer’s toolbox as Photoshop.

In short, rather than realising the potential fear of losing market share because others would no longer be forced to use their software, people started using their tool as a conversion tool in and of itself, and the tool became increasingly recommended by users for others to purchase and use.

Since this article was written, I’ve discovered I’m not the only one who was worried about this concept of unsharability between software. Two terms have since appeared in online discourse directly relevant to this concept: closed ecosystems, and adversarial interoperability. What’s more, now people are genuinely worried about what this is doing to software and the internet.