A Quick Overview Of the 2010 Gemvision Symposium 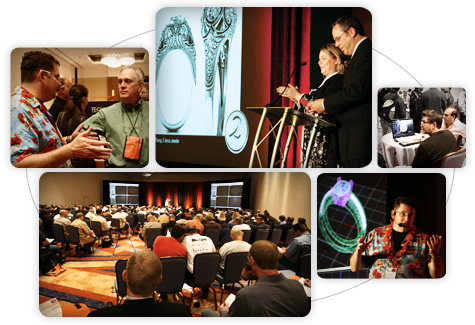 Last week I attended the 2010 Gemvision Symposium in Chicago, and I wanted to share with you some highlights and observations from the event.

There are some nice perks that come with going to an art school like Central Saint Martins. Namely, when we all left my friends scattered across the planet. Bad for your social life, perhaps, but fantastic when you have to travel!

So, when I was invited again by Gemvision Europe to attend the Gemvision Symposium this year, I decided to take advantage of their choice of venue to visit my friend in Chicago. Not that this was necessary to go to this event. After all, you could do a lot worse than the Renaissance Hotel in Schaumberg, Illinois for a place to sleep. (Cue traumatic memories of Fawlty Towers-esque “3 star hotels” in Glasgow and Brighton…)

For those of you who have never been before to a technology conference, it’s not quite what you’d expect– it wasn’t just an army of computer geeks fawning over shiny new technology, whooping and cheering at lecturers clicking on a mouse in front of a giant computer screen, and generally revelling in the mayhem of being let out of their cages for three days.

Well, actually, I guess it was all that. But these weren’t ordinary computer CAD geeks. These were seasoned jewellery retail store owners, heads of manufacturing houses scattered across the US and Canada, junior and senior design experts in the painfully demanding field of product design known as jewellery making, and the dealers and vendors which served them. In other words, Gemvision Matrix users, and their Countersketch cousins.

According to our hosts, there were two main highlights for this years convention–

I’ll discuss them one at a time:

Most people I’ve met who spend all day fiddling with rings on a CAD program like Matrix or Rhino have already started exploring other plug-ins which can help them do more interesting work. T-Splines has been out almost two years now, and even when my local Rhino dealer was first introducing it, he was singing its praises as a big step forward for freeform sculptural modelling in NURBS.

At the time, I was sceptical. I saw a demonstration for version 1, I downloaded the trial copy and tried the (admittedly awful) tutorials. What I saw back then wasn’t much more revolutionary than what was already there with the Control Points and Insert Knot commands in Rhino.

Cue two years later, and the demo at the Gemvision Symposium.

T-Splines has clearly had some time to think through what the software could do, and has improved the interface significantly. Add onto this Gemvision’s insatiable desire to meddle with other programs interfaces and scripts, and you end up with a potentially very interesting new way forward with modelling. Like any previous symposium, they hand out work-in-progress copies of the latest version of Matrix to attendees, so we can try out the new features. While I’m still not 100% convinced on the general T-Splines interface, the methods they use for blending, thickening, and piping alone are worth the price of admission.

Now this brings me to Countersketch 2.

I’ve been told before that a sign of a good idea is when people who see it immediately say “Now why didn’t I think of that?” Well, in the case of Countersketch, many people had already thought of this. The idea has been frustratingly obvious to many businesses around the world for years. However, there always remained a handful of obstacles:

Well, Gemvision provided the programming, and Stuller provided the library, and now we have the iPad for CAD design. A bespoke CAD jewellery design program for people who can’t use CAD, serving roughly the same demographic previously using Domino catalogues (or Stuller catalogues in the USA) to sell custom rings to customers.

All this is true of Countersketch itself, but what makes Countersketch 2 a big deal? Well, they’re finally going to start adding in pendants and earrings to upsell from the rings. The unofficial word is they’re aiming to have the add-on collections ready for the Christmas season. Cross your fingers…

I suppose I should also discuss the white elephant in the room with Countersketch. The blessing and curse of the software is that all rings it designs can be ordered exclusively from Stuller for RP, manufacturing, and setting. They even provide the gemstones. Now this is great for many small businesses as it can take a lot of weight off their shoulders on the manufacturing side. However, for bigger stores, this can potentially cut directly into their own business, especially if they have internal CAD/CAM services. I understand of course that this was Stuller’s big idea, and that they deserve all credit for it, but I would not be alone in pleading with them to please allow this potentially great tool to become greater by allowing users to add their own CAD models.

Overall, the Symposium was worth the trip at least once if you use a lot of Matrix or other Gemvision software, but I would strongly recommend against staying in Chicago itself, as I discovered too late that Schaumberg is almost an hour away in traffic.

2 Comments A Quick Overview Of the 2010 Gemvision Symposium