I’ve just had the chance to review the new RhinoRing, a plug-in for Rhino which was recently updated to work with the new version 5.

One of Rhino’s biggest selling points has always been its active user community, and their contributions to functionality in the way of feedback to the software as well as plug-ins.

Even with jewellery, there seem to be enough programmers scattered among the flock to generate interesting and potentially helpful plug-ins. These vary in size from the mathematically complex but user interface simple Grasshopper-based algorithms made by Joan Codina to plug-ins which eventually matured into fully independent pieces of software such as RhinoGold and Matrix. 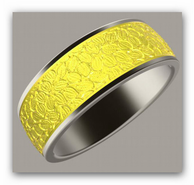 RhinoRing is a relatively new contender to this market, having fairly recently released it’s version 5 compatible plug-in. RhinoRing is designed for jewellery CAD technicians who are either happy to work in pure Rhino or who already have RhinoJewel or RhinoGold, and are looking for a series of additional helper tools to save time with generating frequently requested ring types.

As plug-ins go, there’s no denying this is one is simpler and less involved than the others we mentioned above. But I do have to give them respect for making some elegant little automated builders. In fact, they have quite a few tools which can save Rhino users time when having to create certain common shapes of varying complexity.

For what it is, it is quite effective. If I were to criticise anything about this plug-in, it would be the appearance of the website. Being not entirely finished and not as polished as some plug-ins’ websites, you wouldn’t necessarily know at first impression just how helpful their user support really is. Therefore, don’t let the website put you off a potentially good plug-in.

Minuses: A bit basic overall. Some of the tools overlap with those in the new version of RhinoGold.

Verdict: For the pure Rhino user, or someone who isn’t willing or able to invest in RhinoGold or Matrix, RhinoRing makes for an interesting bare bones alternative.